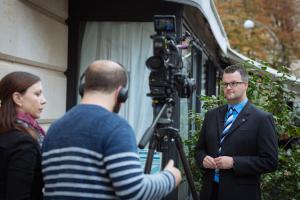 George Foster, our Managing Director, being interviewed by the BBC Travel show on Bodyguards in Paris. 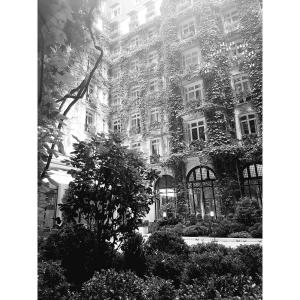 Paris has some of the world’s top hotels and private apartments that are used regularly by VIPs and royals. 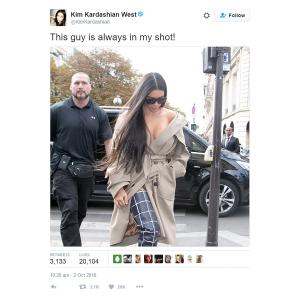 The October 2016 Kim Kardashian robbery in Paris did make a number of VIPs review their personal security.

While Paris is described, rightly so, as the ‘city of love’, many visiting royals and celebrities have found themselves targeted by organised criminal gangs.

No matter what the level of security provided, if it’s professional and viewed as such by third parties conducting surveillance or reconnaissance, it will make the perpetrators think twice”
— Alex Bomberg

PARIS, FRANCE, September 14, 2018 /EINPresswire.com/ — Recent years have seen an increase in sophisticated and intelligence-led robberies that can only be the work of criminal gangs who have carried out their research and must have (in many cases) conducted surveillance prior to the robberies.

It goes without saying that while there are a few very well publicised cases, we also suspect that it is the case that some attacks and robberies go unreported and thus, not publicised. The reason for this is that the negative attention and PR that this brings, serves to highlight failings in the individual’s security setup.

So, you must ask: “Why do members of royal families and celebrities not take their security seriously?”

There are many reasons why Ultra-High-Net-Worth-Individuals (UHNWI) have security issues and can find themselves exposed to an unpredictable level of risk. The most common reason is the desire for privacy, oddly enough the privacy afforded by the right style of personal protection is not enough for some. Wrongly, they feel that they are better off trying to be “low profile” without a bodyguard, yet, become high-profile with their spending or simply their appearance and dress.

It is still possible to achieve the balance between privacy and in having security. A sympathetic approach is of course required and that can only come with experience on behalf of the contracted company and the bodyguard. A competent bodyguard will understand when and where a slightly more covert approach to close protection is required and the principal will have the assurance that his personal security detail is just a few steps away.

The most recently publicised incident concerns $930,000 of jewellery being stolen from a room in the Paris Ritz – the victim was in this case a Saudi princess, but the details surrounding the robbery are still quite murky.

Many will of course remember the very well publicised October 2016 attack and robbery of Kim Kardashian. An incident that saw miss Kardashian tied up in her rented Paris apartment and robbed at gunpoint of $11.2 million (€10 million) worth of jewels.

In both cases, had the victims utilised Residential Security Teams, then the likelihood of these robberies being attempted would have been greatly reduced. In relation to Kim Kardashian, her whole security setup was wrong and the use of social media by her, her team and by her own bodyguard compromised her security to such an extent that a robbery was aided by information posted live online.

Criminal gangs are getting increasingly sophisticated in their modus operandi and they are matching, quite successfully, their level of intelligence gathering, versus the risks and payoffs involved.

In the Cote d' Azur region of the South of France and in the Principality of Monaco, these robberies have involved the use of anaesthetic gas to incapacitate the victims during their sleep. Former Top Gear host, Richard Hammond and his family were allegedly ‘gassed’ and robbed during their family holiday in St Tropez in August 2018 – similar to the 2015 attack of Jenson Button and his then wife, Jessica Michibata.

Attack and robberies on VIPs and royals are not restricted to hotels and residences. In Paris, Princess Astrid of Belgium, had her handbag stolen (including her personal ID) from a car she was travelling in. The car had stopped at traffic lights in St. Denis area of Paris and thieves on a motorcycle reached into the car and stole her handbag. While this was likely a chance theft and not a planned attack, the theft could have been easily avoided, had the car window not been open.

London and Paris based Intelligent Protection International Limited who provide Royalty and Executive Protection for clients from around the world are well-versed in dealing with UHNW clients and also managing their expectations.

Group Managing Director, George Foster said of Paris: “People do feel safe in Paris, it has a relaxed atmosphere that can often lull people into a false sense of security.” Foster went on to say: “the art of our bodyguard service is understanding the clients’ wishes and ensuring that there is a good balance between the perceived risks and the service provided”.

Group CEO of Intelligent Protection International Limited, Alex Bomberg, who commented widely in the Press in the wake of the Kim Kardashian robbery says: “No matter what the level of security provided, if it’s professional and viewed as such by third parties conducting surveillance or reconnaissance, targeting our VIPs (for robbery); it will make the perpetrators think twice – they want an easy target and they don’t want detection or confrontation”.

“Educating VIPs and royals to understand that a good level of security is easily attained without the sacrifice of privacy is part of the battle” says Foster.

Paris is one of the top destinations in the world to visit and the host to a number of annual high-profile events such as the Paris Fashion Week. That combined with the number of visiting royals in Paris and those royals that choose to make Paris their home, will always ensure that those who perpetrate these robberies have new targets to choose from.

Intelligent Protection International Limited provides specialist multilingual bodyguards in Paris and has offices in both Paris and London and was incorporated in 2009. The company is part of Intelligent (UK Holdings) Limited group of companies, a group that grew out of the activities of International Intelligence Limited, an intelligence gathering firm, founded in 2002 by Alex Bomberg.