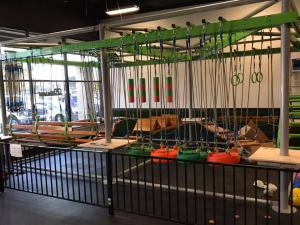 Child development is not something left to chance.”
— Ernie Beltz, Jr., co-founder and CEO of Little Land

AUSTIN, TEXAS, UNITED STATES, January 10, 2019 /EINPresswire.com/ — United States-based Little Land ensures children are on the proper growth development path, but it’s the business’ unique concept that has the company growing internationally in its third year of operation, and only two years as offering as a franchise.

In 2014, Ernie Beltz Jr. and Debbie Garcia-Beltz, OTR/L founded the Little Land concept. Debbie has spent nearly 20 years as a pediatric occupational therapist and used her experience as the foundation to create the gym’s model. All play equipment at Little Land is designed by pediatric therapists to enhance physical, sensory, and social development while being a fun activity.

“Child development is not something left to chance,” said Ernie Beltz, Jr., co-founder and CEO of Little Land. “With the use of our specially designed equipment, parents see that play has a specific purpose along with being fun for their children. It’s those results that make the Little Land concept a success for children and for the business.”

Little Land has reached an agreement to open more than 100 locations in the next three years across China. The first location in Beijing is expected to be open by mid-2019. According to the International Franchise Association (IFA), there is a significant opportunity for franchises in China due to the rising middle class and greater potential for consumers.

Little Land will be a first of its kind concept in China and offers a much-needed reprieve from technology. In China, the number of children is growing quickly, and families have identified the need to seek specific types of activities to ensure their children develop on-track – which is why Little Land is expected to grow rapidly across the country.

This expansion demonstrates that the need for purposeful play is gaining momentum around the globe. In fact, because of the increase in use of technology, the most common recommendation from the American Academy of Pediatrics (AAP) for pediatricians to prescribe is play.

“We are thrilled with the company’s progress, but when we think about how many young lives will be better because of Little Land, that is how we measure success,” Debbie Garcia-Beltz said.