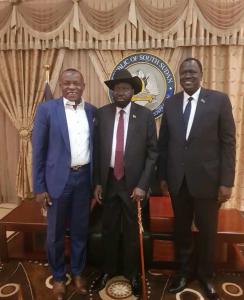 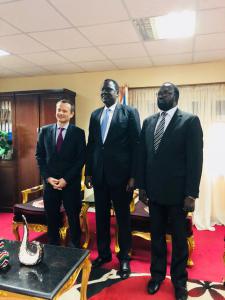 Sahara Group is passionate about spearheading sustainable development in Africa and remains unwavering in its resolve to support peace & trade integration on the continent to promote shared prosperity”
— Temitope Shonubi, Co-founder and Executive Director, Sahara Group

JUBA, SOUTH SUDAN, April 15, 2019 /EINPresswire.com/ —
As the South Sudanese people and the world remain in awe of the inspiring feet kissing and blessing of the nation’s leaders by Pope Francis, Sahara Energy Resources DMCC, Dubai, has extended a $600 million facility to help boost resurgent hope for peace in the world’s youngest democracy.

Pope Francis recently kissed the feet of President Salva Kiir Mayardit and Vice Presidents-designate Riek Machar and Rebecca Nyandeng de Mabior during a “spiritual retreat” at the Vatican, urging them to “remain in peace”. Steeped in a consciousness that spurs reciprocal forgiveness, the Pope’s widely commended gesture and ongoing support from various governments and corporate entities like Sahara Energy signpost a prospective march toward peace in South Sudan.

The $600 million facility provided by Sahara Energy DMCC, a member of the leading energy and infrastructure conglomerate, Sahara Group, is expected to support the peace process and facilitate sustained economic growth and development in South Sudan. “Sahara Group is passionate about spearheading sustainable development in Africa and remains unwavering in its resolve to support peace and trade integration on the continent to promote shared prosperity, “said Temitope Shonubi, Executive Director, Sahara Group in a meeting with President Kiir in South Sudan.

The World Bank reports that South Sudan is the most oil-dependent country in the world, with oil accounting for almost the totality of exports, and around 60% of its gross domestic product (GDP). The cost required to help 6 million South Sudanese – half of its population – cope with the effects of the country’s economic situation was put at $1.7 billion in 2018, according to the United Nations. The huge funding challenge of transforming South Sudan makes the Sahara Energy facility and continuing global support inevitable.

In line with the governance requirement and need to preserve the integrity of South Sudan’s oil resources, the facility provided by Sahara Energy will be managed by the nation’s Central Bank under the watch of a United Nations led committee.

Shonubi said Sahara Group, working in concert with various stakeholders, would support infrastructure development and youth empowerment in South Sudan. “Following the end of the conflict and the reconciliatory efforts made by the Leaders of the Country, we are delighted to partner with the Government and people of South Sudan as well as support regional and global initiatives geared towards transforming the nation. Sahara Group has consistently advocated increased commitment to intra-Africa interventions through collaboration of all stakeholders. This, for us at Sahara, enhances the cause of giving wings to the aspirations of the continent’s over 1.2 billion people.”

Shonubi had during the 2019 African Refiners Association (ARA) meeting in Cape Town reiterated the urgent need for intra-regional trade in Africa and the commitment of Sahara Group to promote the cause. He told delegates at the meeting that Sahara Group, in keeping with its vision of a harmonized Africa, was building an integrated energy business across Africa to harness the potential of intra-regional trade. “We are delighted to be one of the first African companies to carry out full cycle crude and product trade transactions using only African resources within the continent. All transactions were carried out by Africans for Africans using African resources. The future of our business depends on how well we can work together across Africa,” Shonubi told the gathering of the continent’s leading energy sector players.

Working through the Sahara Foundation, Sahara Group has since renovated and upgraded the University of Juba Computer Center in South Sudan with brand new computers, central UPS and server, air conditioners, roof mounted projector and furniture.

The facility will boost ICT penetration within and outside the university community and ultimately inspire the emergence of more “techpreneurs” in South Sudan. Sahara Foundation has also provided farm equipment to cooperatives in a bid to boost crop production and self-sustainability in the region.