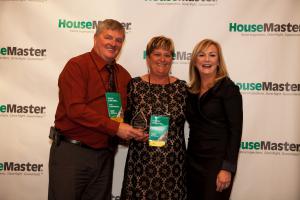 Fred and Cathy Holwell (left) alongside Kathleen Kuhn, President and CEO of HouseMaster

Providing an exceptional service to our clients is what keeps me going.”
— Fred Howell, HouseMaster of St. John's

Fred Holwell, who owns and operates the home inspection business in St. John’s, says that constant marketing, exceptional customer service and persistence has been key in building the business to where it is today.

“We hit every real estate office in town every month, in person, to network and let them know we are ready to provide top notch home inspections. We bring goodies too!,” Holwell said. “It took us several years to really ramp up but we stuck with it and really got a foothold in the market here. From there, we just kept rolling.”

Fred Holwell launched his HouseMaster Home Inspections franchise in 2001. Along the way, he has had wonderful team members who have helped him with inspections. An inspector named Tom Donovan helped him in the early years of the franchise, while Mark Boone was an influential inspector and team member when the economy was hot in Newfoundland from 2007 to 2011. Sadly, Mark passed away suddenly in 2011, which impacted Holwell. “There are not many times that I think of him when I don’t get a chill through me to this day,” he said.

It was at that same time when Fred’s son Chris Holwell was training to perform inspections. Chris has been working with his father ever since and is an integral part of the business.

It is a true family operation. Along with Chris, Fred’s wife Cathy is responsible for marketing and administration and his daughter Mallory works part-time on marketing and administrative needs. His wife Cathy joined alongside Fred in 2005 and it is then that he says the business really took off. In 2006, they received the HouseMaster “Market Penetration Award” for earning the highest dollar amount per owner-occupied homes in their territory. They received the award for more than 10 years in a row.

When reflecting on how he has grown the business to where it is today, Holwell said: “Providing an exceptional service to our clients is what keeps me going.”

He added that: “It’s crucial to me to make sure that the client is buying a fairly sound structure, or going into the deal with opened-eyes where we make them aware of any and all situations that they may encounter. We give them the details and let them make a proper and informed decision.”

Holwell has an affinity for helping people buying a home for the first time.

“It is always a pleasure to see the first time buyers and give them peace of mind that they’re going to be alright with the decision they made going forward,” Holwell said.

HouseMaster Home Inspections serving St. John’s is part of a 40 year franchise tradition of offering the most trusted inspections in the industry. Holwell is a leader in his community and throughout the HouseMaster franchise system.

“All of us at HouseMaster want to congratulate Fred and his entire family for achieving this wonderful milestone,” said HouseMaster President and CEO Kathleen Kuhn. “Our goal at HouseMaster is to create opportunities for our franchise owners to build lasting businesses that serve their community well and leave a legacy for their families. Fred’s business is a perfect example of this.”