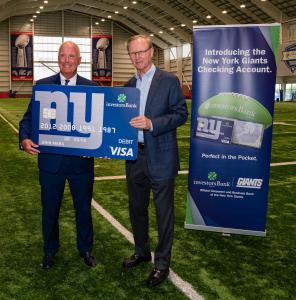 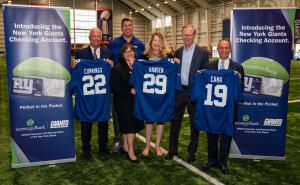 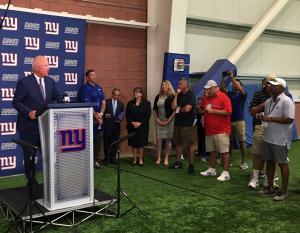 The Giants and Investors Bank share the belief that our fans and their clients deserve an exceptional level of service, and we are both dedicated to achieving that goal.”
— New York Giants CEO John Mara

The New York Giants Checking Account was designed to engage and excite the football franchise’s enthusiastic fans. Investors Bank is prominently featuring the New York Giants logo on each account holder’s debit card and checks. Everyone who joins the Big Blue Checking Crew will have access to many premium features and amenities.

Investors Bank and the New York Giants are also announcing a joint corporate social responsibility program. Each time Big Blue scores either a touchdown, field goal or safety this season, Investors Bank will donate $250 to the non-for-profit CASA (Court Appointed Special Advocates for Children) of New Jersey. Dedicated, compassionate and highly trained CASA volunteers assist and serve some of the most vulnerable children in the region.

Reviewing the alliance, Mr. Cummings said, “Our bank continually strives to develop new and exceptional ways to serve our consumer and business clients, which is why Investors Bank is linked to the New York Giants. We are solidifying the relationship with the fabled Big Blue team by launching our checking account, which enhances the legacy of each organization. We are also grateful to be one of the only regional banks in America to partner with an internationally-known, professional football franchise.”

Fans are invited to show their team pride by opening their New York Giants Checking Account at one of Investors Bank’s 147 branches. Fans will receive a 20 percent discount each time they use their Giants debit card to buy merchandise at shop.giants.com. The Giants Checking Account also comes with premium features such as free identify theft protection and cellphone insurance for three smartphones.

Banking with Giants Checking is convenient and rewarding. The dedicated client services team at Investors will help fans switch their account and join the Big Blue Checking Crew. Fans also have an opportunity to score big, and they may receive a cash reward by opening an account and referring their friends. For people who bank on the go, Giants Checking has a mobile wallet feature that is supported by the three major payment services, and they have access to exclusive New York Giants weekly postgame content that is presented in a mini-podcast format.

For more details about opening the New York Giants Checking Account, visit one of the Investors Bank’s local branches or click on https://www.myinvestorsbank.com/Giants.

Source Communications is the advertising agency of record for Investors Bank. Source’s President Larry Rothstein and his team played a key role in creating the marketing campaign to launch and build positive awareness about the New York Giants Checking Account.

About Investors Bank
Investors Bank, headquartered in Short Hills, New Jersey, is a full-service community bank that has been serving customers since 1926. With over $27 billion in assets and a network of more than 145 retail branches, Investors Bank delivers personalized services and products tailored to the needs of its customers. Investors Bank’s banking services include complete deposit, loan and cash management products for consumers and businesses. For more details about Investors Bank, visit the website address: https://www. investorsbank.com
Investors Bank: Member FDIC and Equal Housing Lender.

About the New York Football Giants
A cornerstone franchise of the National Football League, the New York Football Giants began play in 1925. With eight championships, including a victory over the New England Patriots in Super Bowl XLVI, their second in five seasons, the Giants are the only franchise in the NFL with a Super Bowl victory in each of the last four decades. Headquartered at the Quest Diagnostics Training Center in East Rutherford, N.J., the Giants enter their 95th season of play this fall. For more information, visit www.giants.com.
About CASA of New Jersey

CASA of New Jersey, Inc. is part of a national network of non-profit programs that advocate for children removed from their families because of abuse or neglect. CASA of New Jersey provides a voice for abused and neglected children by empowering a statewide network of 21 county-based programs. Working through community volunteers, these programs advocate on behalf of children in foster care and other out-of-home placements to ensure their well-being and ultimate placement in safe and nurturing permanent homes. To learn more about CASA of New Jersey, visit www.casaofnj.org. To find a CASA program in your county, visit www.casaforchildrennj.org.