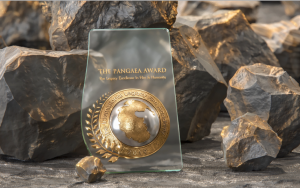 Honoring the works of revered, living visionaries determined to change the world today

The Pangaea Award is an accountability award that mirrors the values of inclusion, empathy, ambition, responsibility, transparency, and ultimately – Legacy and is the first award presented to global humanitarians from the film and entertainment industry on behalf of the millennial generation and beyond.

“The International Legacy Film Academy is excited to unveil the nominees for the first-ever Pangaea Award,” states Jean-Que M. Dar, Founder, and CEO of TILFA. “This first group of nominees includes many of the most prominent humanitarians on the planet who’ve made it their mission to positively impact the world we live in while ensuring that their fingerprints never fade from the lives they have touched. It is our honor to celebrate and acknowledge these outstanding individuals who have challenged the undefeatable odds to execute change where change seemed impossible.”

Established in 2019, the Pangaea Award par Legacy Excellence is a symbol that “art creates what policy cannot – a new vision forward.” The award is a symbol of unity, solidarity, completeness, humanity, compassion, and accountability. Founded around the concept of “all the earth,” Pangaea was the name of our supercontinent that existed over 200 million years ago that started to break apart owing to continental drift. The spirit of the award mirrors the concept of Pangaea as we honor the works of humanitarians that are determined to shift our world back together again. The goal is to honor and support the efforts of these fantastic visionaries while inspiring others to leave a legacy that serves humanity.

For more information on The International Legacy Film Academy or the Pangaea Award, visit TILFA.org/Pangaea.