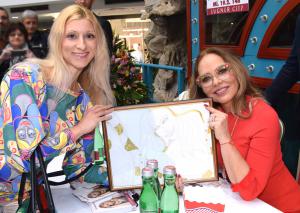 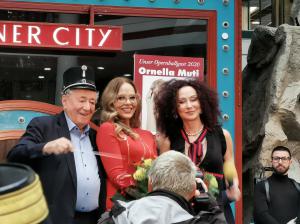 After Lyndsey Vonn's cancellation, Ornella Muti decided to go to the Opera Ball as Richard Lugner's guest. At the press conference, the actress thanked Lyndsey Vonn for the cancellation. Richard Lugner also raves about his guest: "She is great … She makes all together". Ornella Muti came to Vienna on Tuesday with a private jet from Genoa. In the evening there was dinner in the Hotel Sacher. Of course, the famous Sachertorte should not be missing. The actress is thrilled with everything she has heard about Vienna. This is her first visit to the Vienna Opera Ball but Ornella Muti was already at the Vienna "Life Ball". "Richard is very charming and very friendly" – says Ornella Muti. She already knew the name Lugner before the invitation. Ornela Muti also wants to "do a little dance" with Richard Lugner.

Ornella Muti has become known for her films such as "Il bisbetico domato", "Give the Monkey Sugar" with Adriano Celentano, or "Oscar" with Silvester Stallone. In addition to Italian, she also speaks German, English, French and Russian. In childhood, the actress lived in Switzerland and learned the Swiss dialect. In Italy she went to a German school. Richard Lugner was very impressed by the intelligence, charming nature and her joy as a guest. Christina Lugner raved about the family favorite film "Oscar" with Ornella Muti and Silvester Stallone in Lugner City on Thursday.

The well-known pop artist Tanja Playner is also very taken with Ornella Muti and painted a portrait of Ornella Muti. Ornella Muti enthusiastically accepted the artwork from Tanja Playner in Lugner City.
In addition to Banksy, Tanja Playner is one of the few living artists who have shown their art at the Musee du Louvre Paris and who were present with their performance during the La Biennale in Venezia 2019. Her artworks will be seen also during the Cannes Film Festival time in May 2020 at the Fine Art Cannes Biennale, organized by MAMAG Modern Art Museum and MOCAMAG Museum.

On Thursday February 20th the time has come. The Ball of the Balls – The Vienna Opera Ball with many international guests from society, politics, business. 144 debutants from 11 different countries will open the ball. The debutante heads will wear a high-quality Swarovski tiara again this year. This year the Swarovski tiara was designed by Monsieur Christian Lacroix. The Vienna State Opera Orchestra under the direction of top conductor James Conlon (overture to “Die Zauberflöte” by Wolfgang Amadeus Mozart as well as vocal and ballet parts); the stage orchestra of the Vienna State Opera under the direction of Markus Henn (Fanfare) and the Vienna Opera Ball Orchestra under the direction of Andreas Spörri will spoil the guests with music. The 64th Opera Ball will be opened by soprano Aida Garifullina and – for the first time at the opening of the Opera Ball – by starter KS Piotr Beczala.