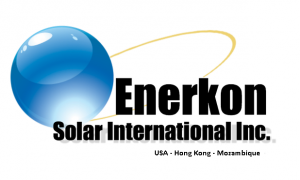 New Technologies for a New World

ENKS Chairman – Mr. Benjamin Ballout stated today that "in keeping with our previous announcements regarding plans to establish a new Technology Holdings Division for New Patents recently Acquired, we are pleased to advise that the legal formation of the wholly owned corporate division Enerkon Technologies Holdings Inc. has been completed"

Mr. Ballout further states that "the company has recently purchased and developed several important and disruptive technologies which are Patented/Trademarked for Monetization and Commercialization during the this year and the first 2 quarters of 2021 – the technologies are as follows:

1. Covid Shield PI (Passive Immunity) CDT (combination drug treatment) a New Groundbreaking, Trademarked/Patented, Passive Immunity, Drug Regime which provides passive immunity (Vaccines provide active immunity, at no more than 40% effectiveness against Corona virus in general and are not expected to do any better for Covid 19 – Whereas, Covid Shield PI (Passive Immunity) CDT, is expected to have a 85%+ effective "passive immunity" ratio, protecting the global population from infection by Covid19 as well as a treatment for those already infected. The new approach mediates the most egregious and dangerous effects of the new pathogen. Human Trials, are now expected to start abroad, whereby data sets will be presented to the FDA and Project Warp Speed and others, as well as foreign country regulatory authorities, for Fast Track Approval, for distribution to the Populations most vulnerable demographics world wide. The company expects to see results and potential approval, before December this year.

2. Aluminum / Electrolyte Fuel Cell (Electric Vehicle Battery) Patented and using a new de-fouling technology (silver nano particles) which supersedes other similar attempts at commercial viability, giving our technology a green light for commercialization, monetization and distribution. The new technology is 38% lighter and less expensive, then lithium cobalt and other current EV batteries in production and does NOT require an expensive National recharging Infrastructure as they are swapped out at participating roadside market franchises in 5 minutes and sent for recycling – using a unique scanner based Cloud driven "pay as you use system" that is at or under the national market cost, for currently used EV Battery technology and having a range much greater (1500 Kilometers) – The new technology, initially called the ENKS AL-Ox Battery (fuel cell) is slated for initial road testing of prototypes for commercialization (Battery factory / recycling facility ) providing the batteries to EV Car Manufactures world wide during late 2020 this year to mid 2021.

3. ENKS recently signed a purchase contract for 20% interest in ALBAYRAKLAR Defense Unit a Turkish division of ALBAYRAK Group – a 56 year old $12 Billion revenue firm. The agreement includes the transfer of all Patents and Rights for new groundbreaking Police Hand Held Stun Gun which is wireless and much more superior and safer than the Taser, the main competitor company. The company Formed a wholly owned corporate division (Wattozz Holdings Inc) as per the agreement which currently hold the Patents rights and technology as well as the Pre orders world wide. The company expects to finalize technical and financial elements of the transaction with further plans to up-list on NASDAQ once the companies AUDIT for the former 2 years are complete during the coming months of this year. The Technology and Patents are valued by a Bakertilly valuation report at a considerable sum. Pre orders will be filled by contract manufacturing, implemented by ENKS. It is noted that Forbes recently wrote an article on the Technology, which was published internationally in the Forbes Online Magazine.

4. The company further acquired rights to new disruptive technology in the Blockchain / Cryptocurrency sphere, which is in the form of a non-mined – Gold Backed, Currency unit, called the African Gold Dollar, or simply the Gold Dollar. This technology depends on the fact that it works in tandem with a participating government, or commercial entity approved by a national government and currently the company has reached such as stage in East Africa for its initial launch – whereas the currency units, will be tied to Government and commercial holdings, of Audited Physical Gold. The trading and exchange rate will be tied to the Spot Gold price in real time, for one version and pegged to the dollar in another version – while all units are backed by Gold in a minimum 1:1 ratio or more. The company expects that this new concept may catch on with other developing countries and then larger countries afterwards, over the coming years.

Mr. Ballout, in his closing statement today stated " we are encouraged by the present situation even in the face of the COVID19 Pandemic and look forward to the rest of this year and coming years, with optimism "

The foregoing statements are forward looking statements, and as such, they may or may not
reflect the results which could transpire in the future which should be negative or not transpire
at all due to circumstances or other reasons and investors, shareholders, or others should not
rely on these forward looking statements to ascertain any value if any of ENKS or to make any
investment decisions and to take note that this is not an offer to buy or sell securities or an
endorsement of ENKS for investment purposes as all investment carry a risk of loss sometimes a
total loss of your investment in Micro cap shares markets or any market and therefore such
statements or plans should not be relied upon for any business decisions of any kind.

Approval and permissions required by federal regulations may or may nor be approved and if not
approved may result in the loss of all value and all investments in products requiring such
regulatory permissions to market and sell. These statements are made as forward looking
statements for educational purposes only in accordance with the rules and regulations which
pertain to the same.