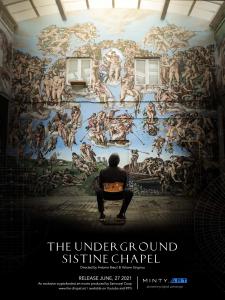 The Underground Sistine Chapel follows a diverse and eclectic cast of over 400 personalities to tell the incredible story of a magnificent effort to turn a dilapidated building in an impoverished neighborhood outside of Paris into a "modern Sistine Chapel," filled with art, culture, and community gatherings.

Be the first to view The Underground Sistine Chapel trailer here http://www.youtu.be/H4IFznRWNJ8

The 200 NFTs are exclusive and rare digital collectibles from the film's transformative, thought-provoking production, including Rare cards, Directors' cuts, and early-access and Avant-Première tickets. They will be sold through a private sale launching on pre-sale today, Monday, 14 June 2021 exclusively on Minty.Art.

The Underground Sistine Chapel debuts on Sunday, 27 June 2021, and will be available for free on Youtube and InterPlanetary File System (IPFS).

“As producers and directors, we wanted to offer this film on the internet, free of charge. It is an approach that is totally misunderstood by film or audiovisual producers at present. There is a whole symbolism of independence for us because it is the first film in the world which gives birth to NFTs and that is intended to be shared for free on the net, just as Pascal's works are offered for free in the street. " – Antoine Breuil and Yohann Grignou

The Underground Sistine Chapel is directed by Yohann Grignou and Antoine Breuil. True to the spirit of the documentary's dedication to a world that revolves around the unexpected, a one-of-a-kind cryptocurrency sponsorship campaign supported Pascal "Pboy" Boyart, the acclaimed street artist at the heart of the project documentary. Thanks to that innovative backing, PBoy was able to finance creating his revolutionary efforts to transform an abandoned former gold foundry seemingly doomed for destruction into a marvelous hallmark of culture, art, and community. The NFTs represent specific parts of the work at Pboy's Modern Sistine Chapel. Visit the film’s site here http://www.the-chapel.art

PBoy is hardly a stranger to breaking boundaries in the art world. He was the first painter to attach a Bitcoin QR code to his murals to solicit and support donations without the interference of an agency or middleman. His work commonly includes commentaries on the political and economic state of the world. That eye for social justice led him to see the potential for a magnificent masterpiece and event space cultivated on art, writing, engineering, and culture for the community near the fateful abandoned gold foundry.

"We're living through a digital renaissance, and we're only just getting started." – Pascal Boyart

The cryptocurrency sponsorship is true to the cutting-edge populist tone of PBoy's work and the story of creating this project. The documentary was produced by Paris-based Samouraï Coop, the world's first decentralized film production company. The company strives to build a future where making and enjoying art is accessible to all without the interference or barriers created by middlemen and large agencies. The film will be offered for free on decentralized internet communities, and the collectibles being sold are a unique new experience for people who would like to support the film.

"As young directors, it is very exciting to be able to explore new territories… We have a huge panel of possibilities to advance step by step towards bigger and bigger productions, with only our communities to support us! It's really mind-blowing, incredibly inspiring us a lot, and we're energized to keep producing wild films with this mindset." commented Yohann Grignou & Antoine Breuil (Directors)

The Underground Sistine Chapel is a monument to creating unexpected art and partnerships in a chaotic world. This unrivaled project and distribution campaign aims to invite people to a future where art and film are decentralized, and art culture is accessible to all.

For media inquiries, film interviews, and additional information, contact WORKHOUSE via info@workhousepr.com or +1 212. 645. 8006

Minty.Art
Minty is pioneering digital patronage through a platform where artists can create and connect with their patrons. Minty.Art is building a fair and sustainable ecosystem by leveraging the limitless features of blockchain technology, decentralized finance (DeFi), and NFTs. Visit http//www.minty.art