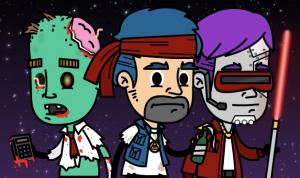 NEW YORK, UNITED STATES, October 28, 2021 /EINPresswire.com/ — Meta Mobs is launching the first NFT trilogy consisting of three connected works of art – The Undead, The Survivors and The Cyborgs. The pre-sale of the Meta Mobs NFTs begins on November 11 at metamobs.com.

A non-fungible token (NFT) is a unique and non-interchangeable unit of data stored on blockchain. An NFT has two main parts: the visual representation, which, in this case, is the artwork; and the data behind the art that demonstrates its uniqueness within the digital space. NFTs cannot be endlessly replicated like other digital objects can. Each NFT is a one-of-a-kind asset that can be bought and sold just like its real-world counterparts. And as opposed to Bitcoin, where every bitcoin is always worth the same amount, each NFT is unique and can have a variable value. NFTs can also be utilized to authenticate ownership of digital assets.

According to analytics platform DappRadar, the popularity of NFTs is soaring as more people invest in this new technology and its future potential. NFT trading volume surged in the third quarter of 2021 to $10.67 billion – a 704% increase from the previous quarter – and is continuing to explode, as evidenced by CryptoPunk #1422 selling this week for more than $2 million and Bored Ape Yacht Club #27 going for over $239,000. In fact, the NFT subsector is the fastest-growing subsector in the crypto and blockchain world.

Meta Mobs features a trilogy of three connected works of arts that represent a Metaverse dystopia. Each Mob has specific attributes and agendas for the Metaverse.

“The Undead rose and laid waste to the Metaverse. Then, the Survivors of the apocalypse fought back with their improvised weapons, only to realize that they also had to compete with time-traveling Cyborgs,” a spokesperson for Meta Mobs said, describing the interconnectedness between the art. “As the war rages on, the distinctions between enemy and ally blur. Are the Undead simply invaders with an insatiable bloodlust? Are the Survivors to blame for the state of the Metaverse? Have the Cyborgs come as saviors or as subjugators?”

These Meta Mobs will operate as Decentralized Autonomous Mobs (DAM), where the NFT holders will elect a Mob leader and the governing body to make strategic decisions for gameplay. There are 3,333 NFTs total for each mob, with one leader and 10 council members for each mob. Token owners will be involved in strategic decision-making for the future of the project. With an experienced development team, community focused roadmap and unique innovation for interactive gamification within the NFT space, Meta Mobs is poised to increase in value in the long run.

The NFTs can be purchased before they hit the NFT marketplace Opensea by minting directly from the Meta Mobs website or purchasing from the smart contract. The core project development team is available to chat and answer questions on their Discord server.