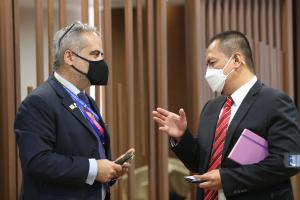 DUBAI, UAE, October 28, 2021 /EINPresswire.com/ — The Ministry of Industry will enliven the Indonesia Pavilion in the event of Expo 2020 Dubai by showcasing a roadmap towards Making Indonesia 4.0, which was launched by the Indonesian president himself, Joko Widodo on April, 4th 2018 in front of the world’s audience. This roadmap is an initiative towards accelerating the development of many industries to prepare the nation to enter the new era of Industry 4.0, which focuses on 7 industrial sectors: food and beverages, textile and fashion, automotive, chemical, electronics, pharmaceutical, and medical supplies.

“As we enter the fourth week of Expo 2020, the Indonesia Pavilion will showcase our progressive development and application of Industry 4.0, the Halal Industry, as well as the nation’s creative economy to the world. Through Expo, Indonesia is able to showcase various potentials in the form of superior national products or projects for the future of the better. This is an amazing opportunity for Indonesia to establish new trade partnerships and attract many investors across the world,” said Commissioner-General of the Indonesia Pavilion, Didi Sumedi.

Inside the roadmap Making Indonesia 4.0, there are a number of national initiatives which will be widely discussed in the Expo 2020 Dubai event. The Ministry of Industry (Kemenperin) will also showcase potential investment opportunities, strategies, as well as the development and potential of the halal industry through a series of business forum events mainly discussing the Global Value Chain Improvement in Indonesia's involvement in the halal industry, financing the halal industry and logistics in Indonesia, to the recognition of halal labeling, certification, as well as halal standard and promotion of halal-certified SMEs products at the Pavilion's remarkable rolling exhibition.

“This very opportunity to feature the Roadmap of Making Indonesia 4.0 and Industrial Estate as a strategic investment spot is also a medium to prove Indonesia’s readiness in openly accepting foreign investment valid to every country across the globe, including the halal industry. With the implementation of business forums to rolling exhibitions that contain various information about Indonesia’s involvement in the Halal Industry thus, this creates an opportunity to attract multiple investment and export opportunities on Indonesian Halal Products.” Said Agus Gumiwang Kartasasmita, Minister of Industry.

Indonesia holds the rank as the biggest Muslim country in the world known to date; with 87.2% out of 268 million, Indonesia's population represents 13% of the world's Muslim population. This makes Indonesia's Halal basic needs are very substantial and the country to have a very high chance in continuing to develop the halal industry. Indonesia's halal exports to the Organization of Islamic Cooperation (OIC) countries rank third with a total of 10.7%, which is a higher value than Indonesia's exports to the Global Market, which only accumulate 3.8% (USD 7.6M)

West Java Renowned Designers Colorize the Indonesia Pavilion
The West Java Provincial Government officials are also here to enliven the Indonesia Pavilion with exhibitions of various local products, including weaves, batik, and embroidery. Some of the multiple fabrics displayed, such as the Majalaya Weaving, are woven manually and categorized as Non-Machine Weaving Equipment (ATBM). The weaving process itself has a specific aesthetic, creating a selling point that can compete in the modern era of fashion and evolve into the current trends up to date.

These various weaving are designed, ranging from Muslim dresses to casual clothes that all men and women can wear. The designers behind these clothes are none other than Rya Baraba, Decky Sastra, Inez Katanhuri, Harry Ibrahim, and Deden Siswanto. Some of these designers have made their way to the International fashion industry, such as Paris Fashion Week to New York Fashion Week.

“The various fashion clothing is one of the many West Java’s superior handicraft products and have high economic value claiming to stand a chance in the international stage. As we all know, West Java is widely known for its wastra (fabric) worldwide. All of these fashion clothing is from the best work of the nation’s children with some happens to have incredible achievements in the past, landing their role in international fashion shows,” said Mochamad Ridwan Kamil, S.T., M.U.D, Governor of West Java.