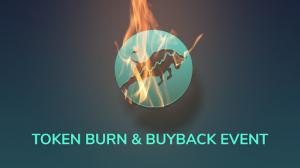 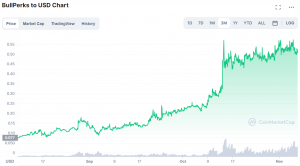 NEW YORK, NEW YORK, UNITED STATES, November 8, 2021 /EINPresswire.com/ — The BullPerks token ($BLP) is expected to reach a new all-time high after the company burned 250,000 BLP tokens and bought back 110,000 recently. These events are popular cryptocurrency strategies supposed to stabilize the token volatility and support its value growth in the long term.

For the BLP holders, it may potentially mean the beginning of a bonanza supported by the rise of the token price which is now observed on asset price-tracking platforms like CoinMarketCap.

THE BLP TOKEN IN THE RETROSPECTIVE

The history of the BLP token started publicly in June 2021, when BullPerks closed its private funding round and raised US$2.1 million. Since then, the token has experienced relatively stable and consistent growth resulting in the company’s increasing popularity among thousands of retail investors worldwide. As of today, the total supply of the BullPerks token is 300M BLP tokens.

After only 4 months, BullPerks established itself as one of the most popular and powerful decentralized VCs and crypto launchpads. The company’s figures have been steadily increasing — from the count of platform users and social media followers to the all-time high returns from the crypto projects launching on BullStarter. All these factors strengthen the BullPerks market position, making it even more attractive to investors.

WHAT IS THE TOKEN BURN IN THE CRYPTO UNIVERSE?

Token burn is an intentional action exercised by the company to remove a specific number of tokens from circulation. It eliminates coins from the available supply, therefore raising their value and scarcity.

The burned tokens are sent to the so-called “eater address,” also known as a “blackhole.” Afterward, they cannot be accessed by anyone and are lost forever. Destroying coins allows preventing their potential misuse when they are no longer needed.

BullPerks decided to burn tokens which were gathered from penalties for the users who unlocked or unstaked their BLPs when they left the platform after the recent update of its tier system. The total amount of tokens burned is 250,000 BLP. The proof of burn serves as a confirmation of the act of token burning.

WHAT IS THE BUYBACK AND WHY IS IT NECESSARY?

The buyback concept is similar to a token burn. Both events are performed for the same purpose — to reduce the number of tokens available in a circulating supply.

A buyback incentivizes long-term growth and motivates investors to HODL the token. It usually helps strengthen asset price stability and increase liquidity. The main difference between these two strategies is their mechanism.

In a traditional buyback, companies buy back their shares and retain their ownership for future use. In the cryptocurrency world, the buyback works the same: the company buys the tokens from its community and stores them in the developers' wallets.

Delivering on the commitment in the whitepaper, BullPerks used a portion of its returns to buy back the BLP tokens. During the recent buyback program, the company purchased back around 110,000 BLP.

Although token burn and buyback programs never guarantee the increase in a token value, they often lead to positive outcomes for investors, such as price stability and higher liquidity. The recent token burning and buyback events performed by BullPerks are excellent examples of this. They have resulted in fast token growth and an overall positive tendency observed currently on real-time price-tracking platforms.