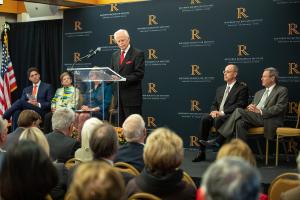 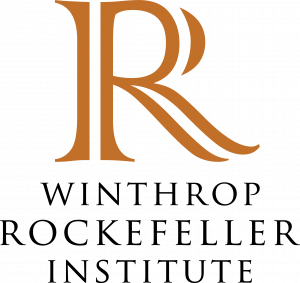 MORRILTON, ARKANSAS, UNITED STATES, November 10, 2021 /EINPresswire.com/ — PETIT JEAN MOUNTAIN, Ark. (Nov. 10, 2021) — The Winthrop Rockefeller Institute (the Institute) is proud to announce the gift of $1 million by Marion Burton of Little Rock. The Marion B. Burton Family Endowment will support the Institute and its ability to deliver on its mission, which is continuing Gov. Winthrop Rockefeller’s collaborative approach to creating transformational change.

“I was on the Institute board of directors at its very beginning, and where I saw a farm, Marion Burton saw a world-class institute that could bring together the very best minds and ideas to address some of the most difficult and intractable problems facing this state, this nation, and the world,” said Dr. Donald R. Bobbitt, president of the University of Arkansas System.

Burton — Gov. Rockefeller’s former pilot and chief of staff, and the only surviving original trustee of his estate — has supported Gov. Rockefeller’s vision for the Institute since its creation in 2005. Burton first met Gov. Rockefeller during the 1964 gubernatorial election, going on to work in his political and aviation activities.

“Winthrop was not afraid to take a chance,” Burton said. “He was very innovative. He was always full of ideas, things that could be done, and he did not hesitate to tackle tough tasks. A gift to the Institute seems like the best way to insure Winthrop’s impact continues into the future.”

The Institute recently hosted a celebration brunch in Burton’s honor attended by two of his daughters, Jenifer and Jynks Burton, his special friend of 25 years, Doris Davis, and his friend and longtime chief financial officer, Donna Huckabee. Unable to attend were his daughter Allyson and son Tyler.

“The generosity Marion has shown toward the Institute, to our people, and to our mission is well-known and long-standing,” said Dr. Marta Loyd, executive director/CEO of the Institute. “This gift solidifies Marion’s position as a living link between his friend and former employer, Winthrop Rockefeller, and the work the Institute is doing to keep Winthrop’s legacy alive. Marion has dedicated his life to ensuring the legacy would continue to make a positive impact utilizing Winthrop’s historic property on Petit Jean Mountain.”

Burton worked with his financial advisor to establish the endowment using the Qualified Charitable Distribution from his traditional IRA. Using this method allows up to $100,000 in funds annually to go directly to the charity without first being taxed while simultaneously satisfying a large portion of the annual required minimum distribution. Essentially, saving him thousands of dollars in taxes and allowing him to give to a charitable cause he cares deeply about. He encourages others to consider this same approach to make significant gifts supporting the organizations they care about.

As executive trustee of the Winthrop Rockefeller Charitable Trust, Burton’s advocacy for Gov. Rockefeller’s legacy and the Institute was a significant factor in the creation of the Governor Winthrop Rockefeller Endowment, a gift of over $100 million from the Trust in October 2018. The endowment is held by the University of Arkansas Foundation.

Click for a photo of Marion Burton speaking at the Governor Winthrop Rockefeller Endowment announcement celebration on Oct. 12, 2018.

“Through his work on the board of the Winthrop Rockefeller Charitable Trust, Mr. Burton championed the idea of an independent endowment to support the great work of the Institute in perpetuity,” Dr. Bobbitt said. “He has always believed in the strength of the University of Arkansas System’s broad mission to serve Arkansas and the world, and the addition of the Institute to the UA System strengthened both organizations. Mr. Burton’s generosity is a glowing endorsement of this partnership, and we are honored by the faith that he and his family have placed in the UA System and the Institute to carry out Gov. Rockefeller’s legacy.”

About the Winthrop Rockefeller Institute

The Winthrop Rockefeller Institute is a nonprofit organization whose mission is to continue Winthrop Rockefeller’s collaborative approach to transformational change. We do this work by employing the “Rockefeller Ethic” which represents the belief that diversity of opinion, engaging in respectful dialogue, and practicing collaborative problem solving combine to create transformational change.