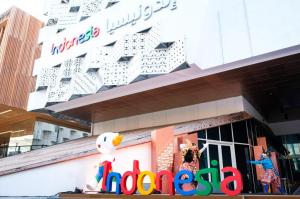 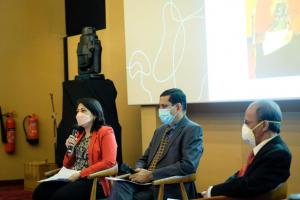 Coordinating Minister Airlangga invites potential investors to join in with other business players who have collectively found it easy to invest in SEZs.

DUBAI, UAE, November 15, 2021 /EINPresswire.com/ — Establishing Special Economic Zones (SEZ) is still one of the many pillars from the Government to distribute economic growth evenly throughout Indonesia. In addition, SEZ also aims to increase the investment value within the region, optimizing industrial activities, including export and import activities, as well as accelerate development and equal distribution of employment opportunities. The existence of SEZs in Indonesia also offers various facilities for investment, in the form of fiscal incentives such as tax holidays and tax allowances, as well as non-fiscal incentives such as one-stop services using Online Single Submission (OSS) for business licensing and registration, immigration regulations, employment, and land management. Throughout 2021, 19 SEZs have been established across Indonesia, engaged in manufacturing, tourism, and creative economy.

"In addition, SEZ will automatically become a part of the National Strategic Project (PSN). Hence it will be counted as the nation's priority to be further developed," said Coordinating Minister for Economic Affairs Airlangga Hartarto in his speech delivered virtually at the Business Forum around the topic of Special Economic Zones held at the Indonesia Pavilion Dubai Expo. The Business Forum will be held from 7 November to 11 November 2021.

SEZs that are focused on the manufacturing industry include Sei Mangkei, Gresik, Kendal, Palu, Arun Lhokseumawe, Galang Batang, Maloy Batuta Trans Kalimantan, Tanjung Api-Api, Bitung, and Sorong. On top of that, SEZs typical in the tourism industry include Tanjung Kelayang, Tanjung Lesung, Morotai, Likupang, LIDO, and Mandalika. Not to mention, the World-scale sporting events, namely the Indonesia First World Super Bike and MotoGP, will also be held at the Mandalika SEZ.

Along with the enactment of the Job Creation Act, SEZ has also expanded its industrial scope to a tertiary industrial scale, including Nongsa and Singhasari, which focus on the digital industry and data center, as well as Batam Aero Technic, which is focused on airplane maintenance, repair, and overhaul (MRO) sector. The Job Creation Law has brought Indonesia into a new and better era concerning the many efforts Indonesia has made to create job opportunities and investment activities.

"Through SEZ, the Government is also committed to building a better investment climate and ensuring three factors, namely certainty, clarity, and simplicity for investors and business players in running their businesses in Indonesia," said Coordinating Minister Airlangga.

Ending his remarks, Coordinating Minister Airlangga invited potential investors to join other business players who have collectively found it easy to invest in SEZs.

"I would like to welcome all of you to come to Indonesia and join us to run your business in the many promising Special Economic Zones sites found in our beloved nation. Hopefully, all the business forum agendas at the World Expo 2020 Dubai will run smoothly and will also bring a breath of fresh air to Indonesia's economy," said Coordinating Minister Airlangga.