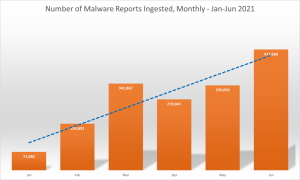 HILTON HEAD ISLAND, SC, UNITED STATES, November 17, 2021 /EINPresswire.com/ — Interisle Consulting Group today announced the publication of Malware Landscape 2021: A Study of the Scope and Distribution of Malware. The study, which analyzed nearly 1.7 million malware reports collected from January 1, 2021 to June 30, 2021, shows a 663% increase in malware reports in the first half of 2021.

Among the major findings in the study, Interisle reports that:

• Malware that exploits Internet of Things (IoT) devices is the fastest growing category of malware. IoT Malware accounted for 56% of the malware reports collected.

• Information stealers and ransomware account for 40% of malware that exploited user devices such as tablets, mobile phones, laptops, and PCs.

• Malware attackers use fewer domains but to great effect. Phishing attacks and spam campaigns use large numbers of domain names as “bait”. Our data revealed Internet addresses are more frequently identified as serving up malware than domain names.

According to Lyman Chapin, Interisle partner and co-author, “Malware is diverse but always dangerous. Ransomware is particularly insidious malware. When this malware hijacks your device you lose control and the criminal takes over—they can alter or destroy your data, encrypt your files, and extort ransom payments. Other forms of malware steal credentials or personal data, which criminals then sell or use for financial gain. The personal, business, and financial losses resulting from such malware can be catastrophic.”

According to Dave Piscitello, Interisle partner and co-author, “IoT malware is mostly used to build massive botnets for distributed denial of service attacks. Like the Mirai IoT Malware of 2016, the Mozi malware we observed in our study exploited known vulnerabilities in the embedded software of DVRs, routers, cameras, wearables, and the like. The IoT industry needs to lock these devices down.”

The full text of Interisle’s report is available at https://interisle.net/MalwareLandscape2021.html.

Interisle is engaged in a long-term effort to collect and analyze data on the way in which criminals abuse the Internet and its users, so that Internet policy development can be informed by reliable and reproducible intelligence based on data rather than anecdotes. As part of this effort, Interisle publishes quarterly phishing and malware activity reports at the Cybercrime Information Center.